7544 is a great option for molds, Boats and Cars

Between now and June 1st get 25% off 5 yard rolls of soft Volan finished 18 ounce per square yard, 38″ wide, boat and tooling type fiberglass cloth style 7544. This heavy cloth is nice and flexible and works with any resin – Epoxy, Polyester or Vinyl Ester. Buy a 5 yard roll for just $48.44 and pay with PayPal and get Free UPS ground Shipping to any of the 48 continental United States.

I get e-mails all the time for different products generated likely from mailing list. However this company and service caught my eye. Miraco makes custom and COTS electrical signal and power assemblies and circuits for different needs and industries.

They are located in Manchester New Hampshire USA 🇺🇸

If your in the market for such components I would check them out. 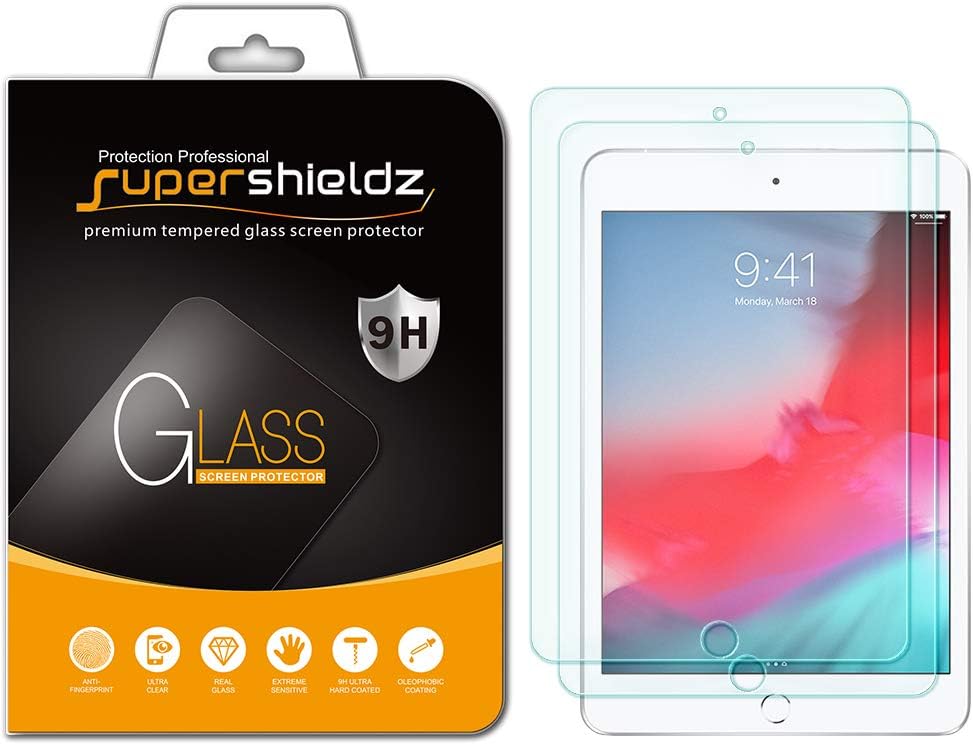 I recently bought an iPad mini 4 from Tiger Direct for only $269 on a sale they recently had. I was in the market for one for a whole bunch of uses. As is the drill when buying any nice touch screen device you need a case & a screen protector asap.

The iPad mini is a great size for general aviation to run foreflight, maps, aviation apps and even a backup display.

Usually when buying a new phone I let the phone store put on a screen protector as they have a good track record for getting it on the screen with out bubbles or smudges.

This time around with an online purchase & limited store access I thought I would check out what was on Amazon. Supershieldz brand stood out as the one to get, beyond it being offered in a 2 pack It has a bunch of other good features as well:

The screen protector and case arrived from Amazon before the iPad from Tiger Direct.

I followed the directions and was able to easily apply the screen protector and push the air out with the supplied cleaning cloth.

Functionality and responsiveness is great. The glass surface is high quality with a good smooth tactile feel.

I would highly recommend Supershieldz for anyone looking for a phone or tablet screen protector.

I came across  www.sourcingusa.com For domestic search for suppliers with in America. One competitive edge that foreign suppliers have had for the past 2 decades is the ease of networking and making connections with buyers ever since the rise of the Internet. The other advantage is these suppliers are willing to work with smaller buyers & low Minimum order Quantity (MOQ). Many of these smaller companies that started small ended up bringing their suppliers with them on the ride up to becoming mega companies.

Hopefully this resource can aid in your next sourcing need where you can enjoy:

gouldaero.com has a wealth of resources on the links page at: 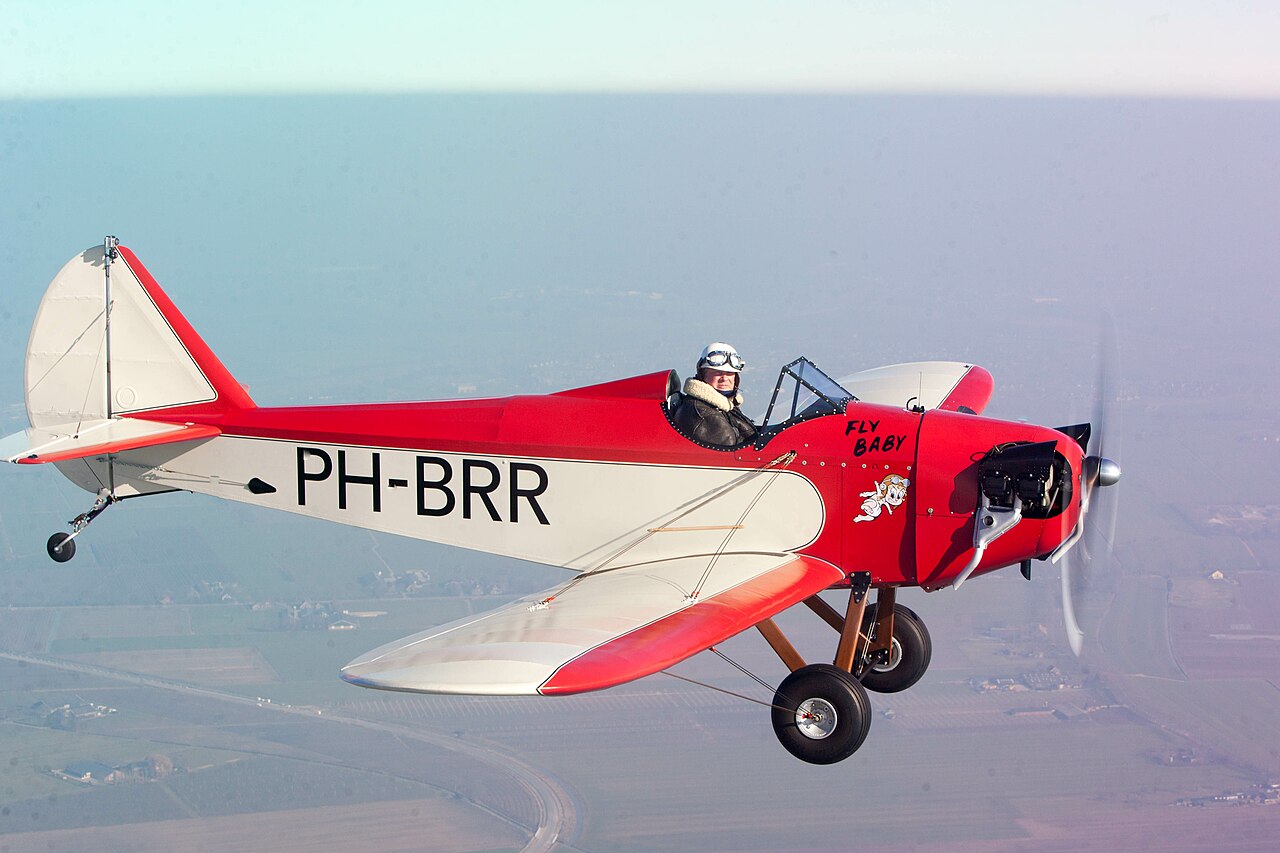 The Fly Baby is a very popular Home Built aircraft with a good amount of RC options as well.

It first flew in 1962 and was designed by Boeing historian Peter M Bowers.

The Fly Baby can also be converted into a Biplane called the Bi-Baby.

Is a great resource, If you are an EAA member there are Sport Aviation articles ranging from 1962 – 2005 plus a pdf download of the 74 paged Building the wood airplane part of EAA’s “HOW-TO” series from way back.

Now for some RC options, Outerzone has a bunch, here are some that look quite workable today with electric power. 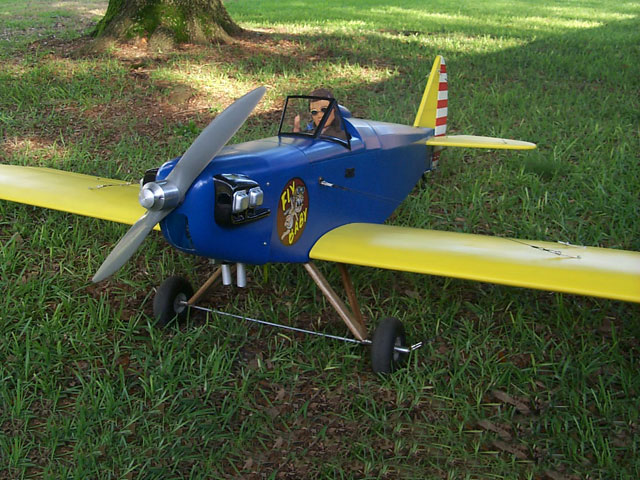 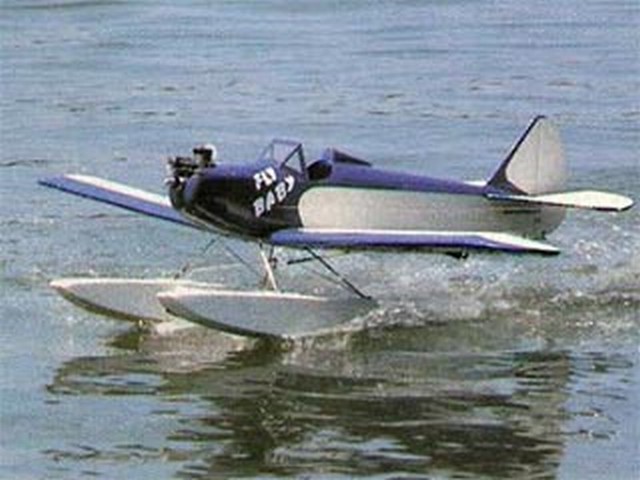 And for some kits & Arf’s

Some good news with our current world, A middle school teacher contacted me letting me know the value that she & her students are getting out of the web site while studying from home. She let me know about an interesting WWII Car, Airplane and Tank article on:

There are 3 main very high value community based organizations (CBO) I recommend for any K-12 STEM program. These 3 are also where I got my start in middle school in the early 90’s

The 3 largest airshows in the US are (in normal times):

Airventure in Oshkosh Wisconsin put on by the EAA (July / August)

Copper State in Buckeye Arizona (usually early in the year)

very accessible and low cost, a good foundation to learn about aviation & turn it into a life long passion.

Tripoli Rocketry Association, Inc. the main organization that puts together model rocket launches, works with FAA & local government to make sure everything is good to go. They focus on high power rockets but they also have the smaller ones at the launches as well.  http://www.tripoli.org/

Hope this helps with your schools programs, feel free to share with other educators.

At 22 he bought rural land in Pennsylvania and just 2 years later at 24 he built a car enthusiast man cave setup. I found this to be a very inspirational video for anyone who is into Car’s, Airplanes, out door toys in general and wants a place to work on them & use them.

You can also check out his:

To learn even more about man caves & construction audio books, Audible is a great option. For my daily commute I listen to 1 – 2 audio books per month. Audible has coverage for all kinds of topics.

The Pitts Model 12 is the #1 aircraft I think of when it comes to Sun-N-Fun. Because the event canceled for now due to COVID-19 I won’t get to see it. Likely the reason it comes to mind is they always have one displayed on a corner in one of the highest traffic areas of the aircraft company display area.

Curtis Pitts design /built the aircraft between 1993 – 1995 and completed it on his 80th birthday. Curtis is well known for a series of acrobatic biplanes that set the standard for IAC contest. The model 12 is the largest  of the Pitts series and uses the legendary M14P Radial Engine.

The model 12 can be built from a Kit or Plans. 92nd West Aviation Inc is the contact.

I got a good amount of experience on Pitts biplanes when I was the Composites & Aerodynamics engineer for  Team Jamaica Mistaka, Race 68 owned & piloted by Jason Newburg (inverted.us now viperairshows.com) in 2006. This highly modified Pitts took home gold @ Reno the same year for that category. I’ve always been impressed with the simplicity & structural efficiency of this design.

There are quite a few YouTube videos on the model 12, here are a few I found interesting.

For the R/C crowd I could find no real scratch built plan options. However Outerzone does have options for other Pitts bipe models. 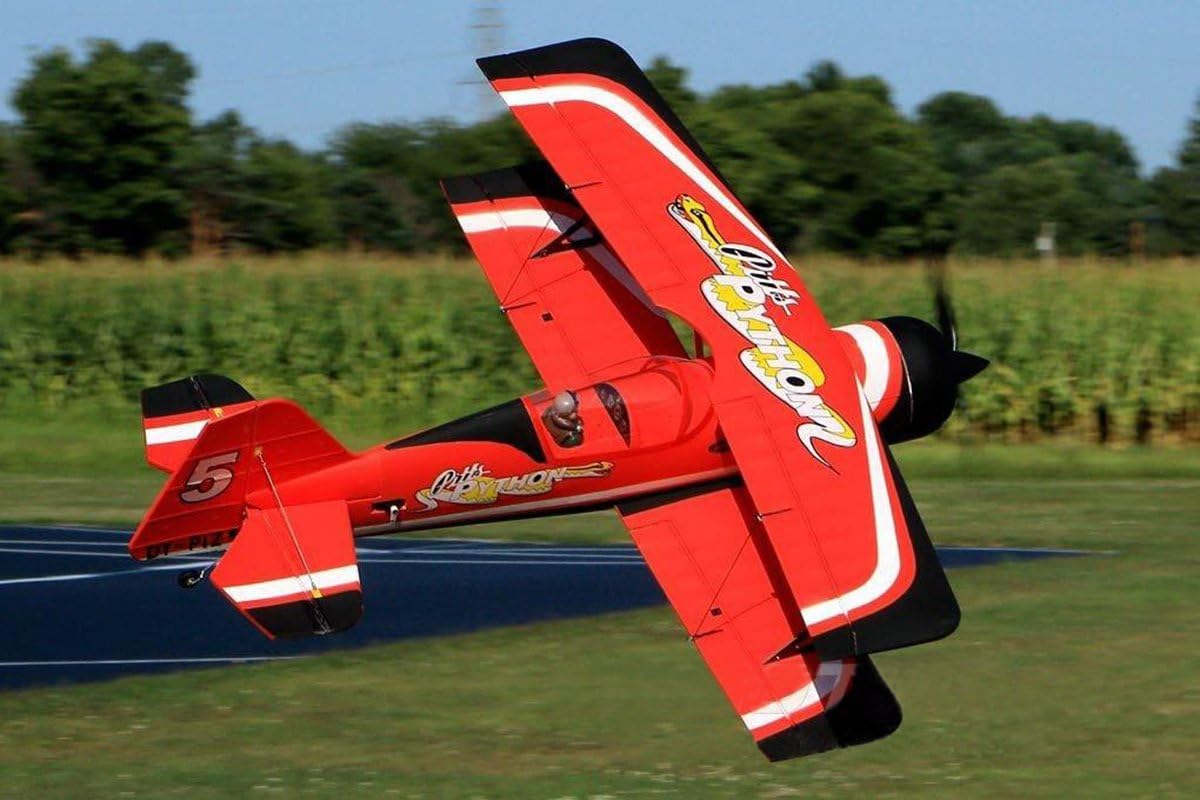 The design team at Dynam has captured this wonderful biplane and stretched the fuselage to improve on pitch damping. It optimizes flight performance without losing the classic lines of this incredible aircraft. The span is a compact yet respectable 1067mm and with the clever use of; EPO foam, carbon and phenolic composites, the resulting aircraft is incredibly lightweight and rigid.

A 4S Li-Po is the battery of choice and paired to this is the perfect balance of oversized brushless motor and ESC giving a potent punch of pace and performance that we haven’t seen in a model of this size.

Featuring a fabulous showroom finish using quality paint and decals this bold scale scheme and contrasting colors will stand out in flight and take center stage on the deck. The aircraft devours snaps, gyroscopic tumbles, flat spins, prop hang climb outs and gives ample grace and poise in slow, point and ratchet rolls that will have all levels of pilots grinning from ear to ear.

Since the whole world is on the COVID-19 band wagon thought I could bring up my go to for when ever I get a cold or flu.

Airborne supplements have helped me get over it faster then any other over the counter product I’ve found. While everyone is hording up on TP, Mask and Gloves I’m surprised Airborne and other immune boosters are not flying off the shelf’s.

Per the talking heads on TV Most people who fall ill to this new strain will not need hospitalization and for those people I would do what ever you can to kick up your immune system.

I usually get the drink dis solvable tables or powered version like this: 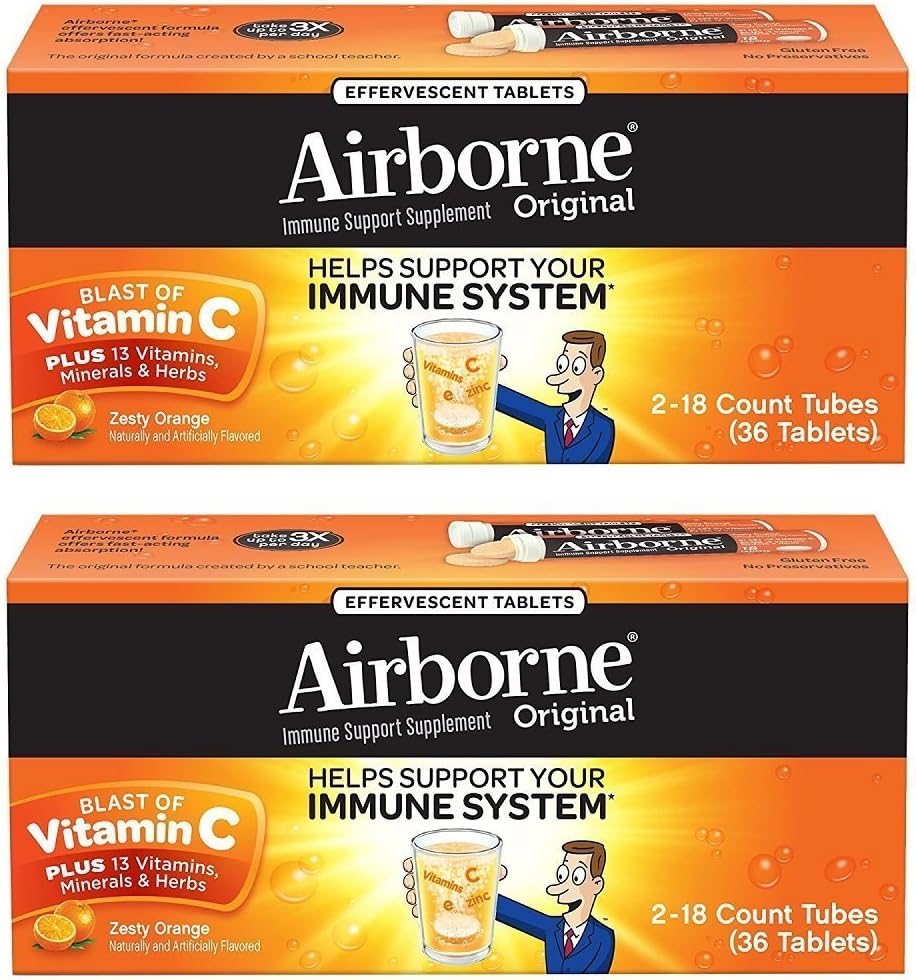 The chew able tables is another convenient way to go.

And for the aviation connection:

One of my main Aviation role models Howard Hughes was a big proponent of Vitamin C (the main active ingredient in Airbourne) to cure illness. 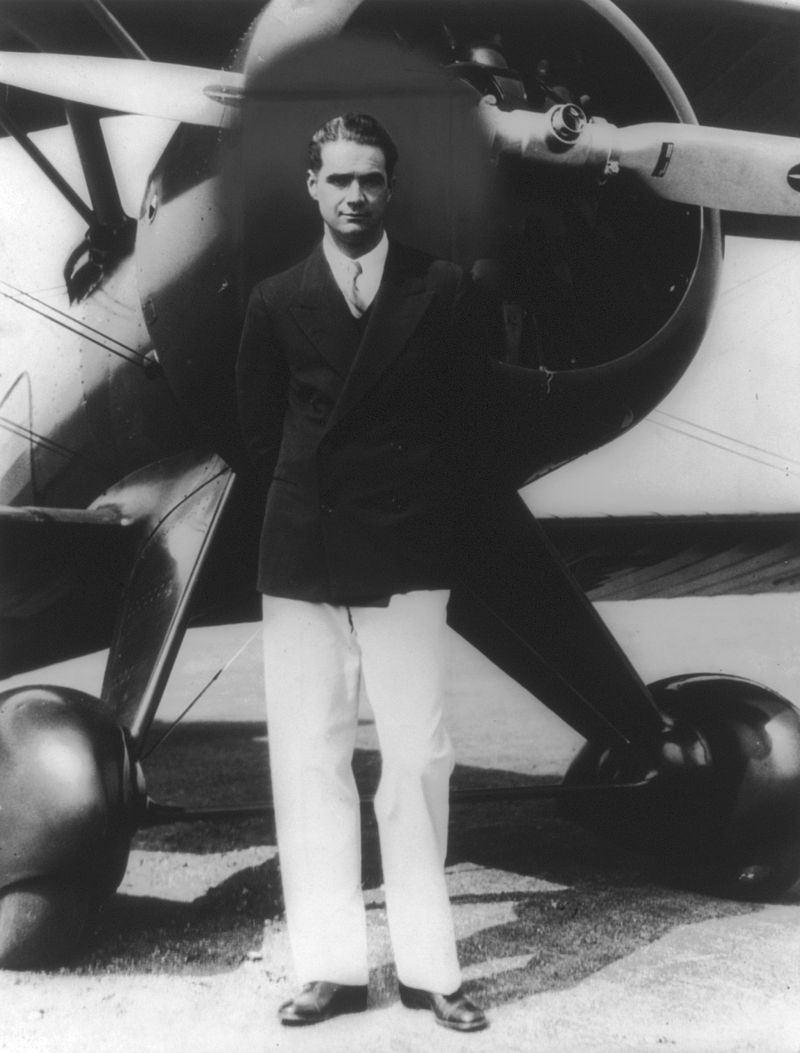 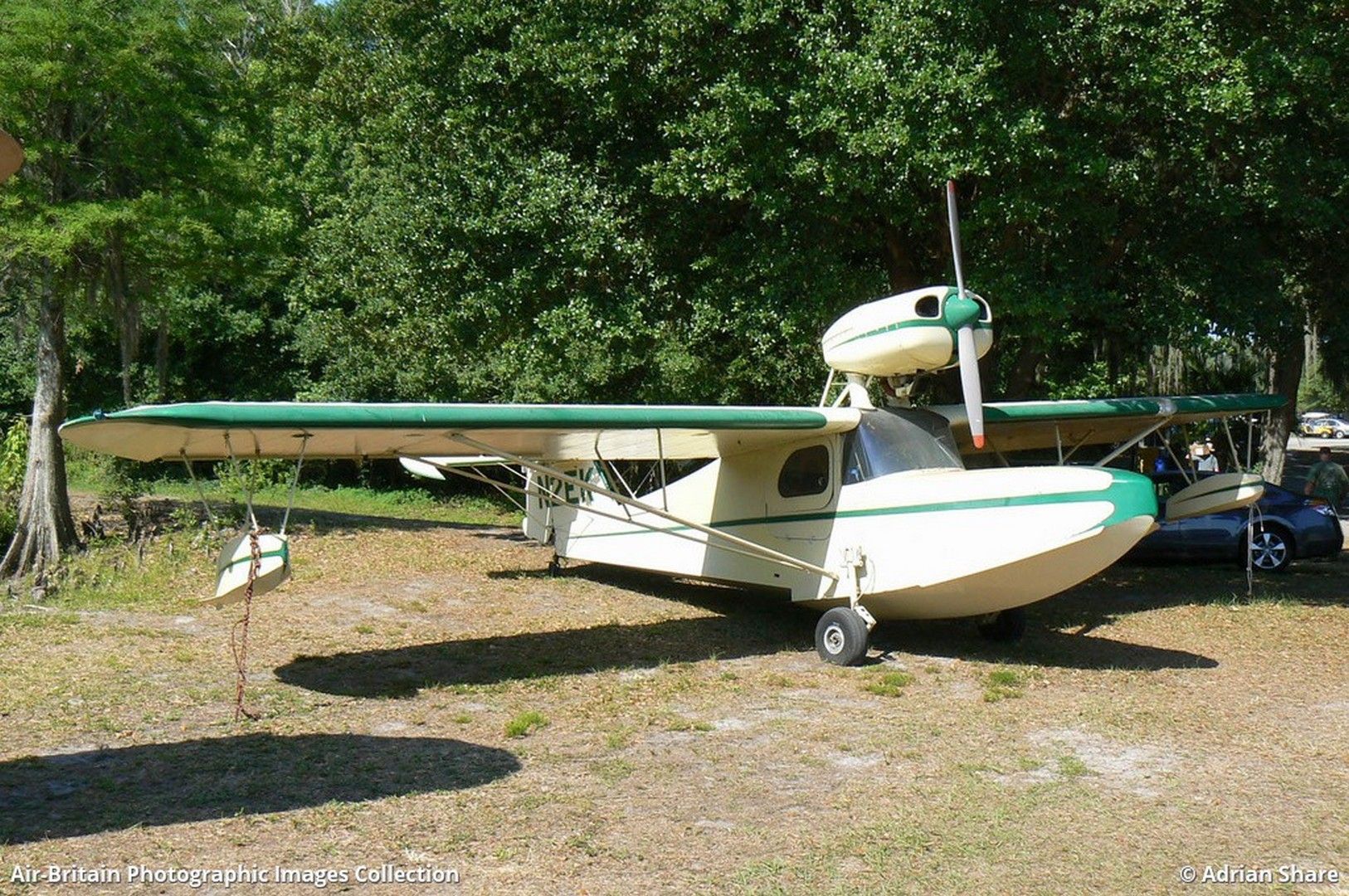 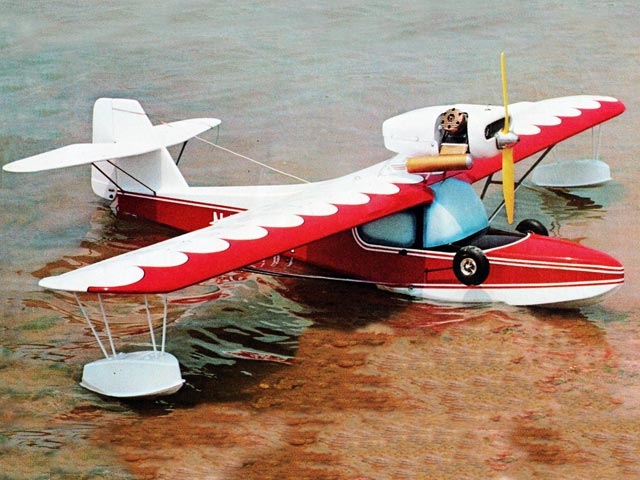